Our cover feature this month strikes at the heart of a captive’s intrinsic link to the parent and discusses its ultimate fate and responsibilities should the parent run into trouble.

Single-parent captives should operate as independent companies, particularly today when good governance and substance are more important than ever. 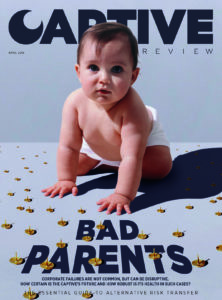 There is no escaping, however, that its ultimate purpose is to serve its shareholders and a capital rich subsidiary will appear attractive to creditors when the parent has gone bankrupt or entered receivership.

In our feature, we reference a handful of contemporary cases of captive parents running into trouble. The regulatory team in Vermont also discuss how they dealt with the high-profile, overnight collapse of Enron at the turn of the century and how they addressed the operation of its captive.

The overwhelming message from all contributors is that if the captive has been formed, structured and managed appropriately with the right collateral agreements in place, then the inevitable conflicts of interest can be resisted and the correct legal outcome will emerge. In many cases, a well-run captive may emerge as the healthiest subsidiary of the overall group and regulators will have little trouble in winding it up and fulfilling its obligations to policyholders.

I am also pleased to feature recent Hall of Fame inductee George Rusu and the team at Captive Resources in this edition. It was a pleasure to sit down with Rusu, Nick Hentges and Kensington Management’s Mike Gibbs to discuss the evolution of their impressive business over the past 30 years and the broader group captive market.

It is fair to say group captives fly under the radar in our coverage of the global captive insurance market, but there is no doubt their relevance to middle-market and large insureds is as great as ever.

Finally, it was my pleasure to speak at the CICA International Conference in Scottsdale, Arizona alongside Udo Kappes and Philippe Vienot, who were representing the European Captive Insurance and Reinsurance Owners Association (ECIROA). Our session provided an insight into the European captive market and it was good to see a number of American captive owners interested in setting up a European captive to deal with their risks on the continent.