Blockchain Feed: The Story so Far

All financial sectors are grappling with the potential benefits and disruption that new technology, cryptocurrencies and blockchain may have. Ultimately, in the (re)insurance industry, traditional business models and procedures are at risk of being cast aside and new techsavvy players can be viewed with scepticism.

Often, the dilemma is that an expert with deep technical understanding of blockchain can see clearly how the technology could positively impact the commercial insurance market. Their knowledge and understanding of the insurance industry, however, may not be up to scratch.

And it works the other way. Individuals with insurance backgrounds within the large carriers and brokers are beginning to make it their business to learn about and understand blockchain and see where it can be applied to their business. Their understanding of the technology, however, may only be superficial.

There are examples of the two silos coming together and producing effective prototypes, pilots and even products that are live today and open to the market. One of the first serious industry-wide moves into blockchain was the formation of the Blockchain Insurance Industry Initiative (B3i) in 2016.

B3i is a coalition of insurers and reinsurers committed to exploring “the potential of using Distributed Ledger Technologies within the industry for the benefi t of all stakeholders in the value chain”. There are 13 founding shareholders of B3i, including Zurich, Swiss Re, Generali, Allianz, SCOR, XL Catlin, Munich Re and
Tokio Marine Holdings. 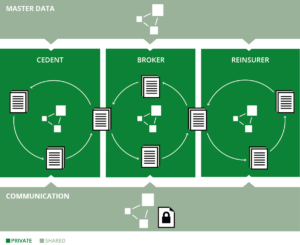 The application is designed to run a shared process, calculation, settlement and reporting on a distributed ledger and B3i says it can handle multi-party and multilayers transactions, smart contracts and asset transfers.

“Cedent, broker and reinsurer interact on the B3i platform, until signed lines are agreed. Placement messages are channelled and encrypted, so that each party can only access and read what it should. The same process applies for the settlement of contracts post-placement.”

B3i says that the architecture is close to “production ready” and a first deployment is expected in late 2018.

While the B3i initiative is a good example of multiple industry leaders working together to produce a widely applicable product, smaller groups and individual carriers in partnership with clients have also been developing solutions utilising blockchain.

The following three cases are in various stage of development:

The carrier and its partners said the results of the trial proved that blockchain can “greatly improve the efficiency of corporate insurance transactions internationally”.

Using Hyperledger Fabric 1.0 as the blockchain framework, the trial addressed professional indemnity and property policies for a captive programme with subsidiaries in the US, China and Switzerland.

The aim was to translate the annual policy renewals, premium payments and claims submissions and settlements into the distributed ledger environment and decrease the time from start to policy, policy to premium and claim to settlement.

“Our captive insurance blockchain prototype demonstrates that regular transactions and cash transfer between fronting insurers and clients can be significantly accelerated and simplified,” says Yann Krattiger, principal at ART.

“Automated processing replaces the exchange of thousands of emails and massive data files. Each process is transparent and can be tracked in real-time. Our customers benefit from increased speed, reliability and auditability.”

Allianz believe blockchain technology will be particularly effective for captive insurance programmes because it will automatically connect all parties involved – captive management, local subsidiaries and the fronting insurers. Recording transactions and data entries, all users should have access to real-time updates to the programme, increasing transparency and efficiency.

AIG, Standard Chartered and IBM announced last year they had successfully completed a pilot converting a multinational programme, containing a controlled master policy written in the UK and three local policies in the US, Singapore and Kenya into a “smart contract” providing a shared view of policy data and documentation in real-time.

Third parties including brokers, auditors and other stakeholders were also included in the pilot. All participants in the programme, based on their credentials, are able to simultaneously view the state of play and record and track events, and associated payments in each of the countries.

Emily Jenner, head of insurable operational risk at Standard Chartered, said: “By creating a process by which we can arrange multinational insurance contracts through blockchain we not only have transaction security but contract certainty across multiple business locations.”

Rob Schimek, CEO of commercial at AIG said: “Our pilot proves blockchain has a powerful role to play in the future of insurance. Any technology, including blockchain, that can increase trust and transparency for an industry whose pillars are built on that, should be fully explored.”

In designing the pilot, Standard Chartered and its partners chose the US, Singapore and Kenya because they produced different regulatory challenges. The US being a “large and complex market”, Singapore being a growth market for the bank and Kenya’s regulators requiring “cash before cover”.

Jenner adds: “We chose these three territories because of their importance to Standard Chartered and also because of their regulatory complexity, so that we could fully test how blockchain technology might make these contracts work more efficiently.”

As with the Allianz pilot, the Standard Chartered blockchain programme is based on Hyperledger Fabric, hosted by The Linux Foundation.

Marie Wieck, general manager of IBM Blockchain, said: “By helping solve some of the biggest problems challenging the industry from eliminating silos of information to improving efficiency, blockchain can truly make an enormous impact and even lead to new business models.”

Shipping giant Møller-Maersk, in collaboration with EY, Guardtime and other partners, announced in September it was embarking on a proof of concept for a blockchain platform for the marine insurance sector.

Using Microsoft Azure cloud technology, the platform is designed to connect clients, brokers, insurers and third parties to distributed common ledgers that capture data about identities, risk and exposures, and integrates this information with insurancecontracts.

In May this year, the partners announced that after a successful proof-of-concept stage ‘Insurwave’ was now being used by Møller-Maersk and participants on a live insurance programme.

It is expected to support more than half a million automated ledger transactions and help manage risk for more than 1,000 commercial vessels in its first year. It is now also open for other shipping companies to utilise.

“Our ambition is to drive the digital transformation of the transport and logistics industry and we see this platform as a testament to the value that can be extracted from streamlining areas of our industry that still rely on manual and often complex procedures,” says Lars Henneberg, head of risk and insurance at Møller-Maersk.

“Operating around 350 owned container vessels across the world, marine insurance takes up considerable resources for us. Moving it to this platform is helping us automate manual processes and alleviate a range of inefficiencies and frictional costs in the way we have used to trade marine insurance.”

While the first phase of Insurwave’s rollout will target marine insurance EY, Guardtime and Microsoft plan to make it available for the marine cargo, global logistics, aviation and energy sectors.