As an industry and a publication, while much focus is on the captive entities themselves, it is important to remember why they exist, who they serve and their ultimate purpose.

The fragile existence of a captive is never more apparent than during, or after, a merger or acquisition at parent level. An established, efficient and valued risk management tool today can be viewed as a luxury or an irrelevance tomorrow.

There are numerous reasons for this – the senior risk manager or finance leader may be less convinced by the captive strategy, or, quite commonly, acquisition activity has produced a larger than necessary captive portfolio. In the latter case, it can be a ‘survival of the fittest’ scenario. The bigger, better managed and suitably located captive should win the day. We should not waste any time pitying those captives that are subsumed, dissolved or sold, however, since they only exist to serve a greater purpose. 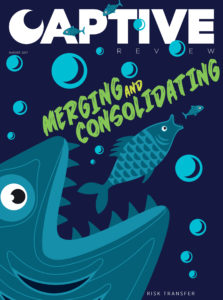 As ever, captive industry service providers are keen to emphasise the value of completing a captive strategy review during the M&A process itself. Too often, captive portfolios have been viewed as an afterthought despite numerous entities often carrying combined dollars rising into the billions that, if extracted or deployed more efficiently, would provide significant value to the parent(s) elsewhere.

The ultimate role of the captive and how it is tailored to shape a parent’s purpose is further outlined by Gilbert Canaméras (page 22) as he explains the rationale behind FERMA’s published guidelines for European tax authorities applying the Organisation for Economic Co-operation and Development’s (OECD) Base Erosion and Profit Shifting (Beps) rules.

Canaméras rightly highlights bespoke examples of a captive’s raison d’être and it should be a priority for tax authorities globally, not just in Europe, to understand those motives if it is going to question its validity as a genuine risk management tool. If the authorities are open minded and in listening mode, then captive owners should have no-one else to blame if they are unable to articulate the business purpose of their insurance subsidiaries.

Lastly, from developed captive markets in Europe and North America to the emerging one in Asia Pacific. Captive Review, in partnership with Labuan IBFC, has published its first white paper on Attitudes Towards Captive Insurance in Asia. We have included the white paper report in this edition to shine a light on some of the unique challenges facing the Asian market and I believe our readers will find it of value.