Captive Review first ran articles on the potential for captives to serve the legal cannabis industry in 2016, when leading lawyer Robert ‘Skip’ Myers delved into some of the obvious legal challenges facing such structures. In 2017 we ran further speculative pieces, but it is only now we are able to begin reporting on actual formations and more bullish players.

Considering the more ‘traditional’ pure captive market still broadly prefers to maintain a degree of secrecy around its parents and domiciles, we should not be surprised an industry as scrutinized, and operating in such legal limbo, is keen to do so too. I expect, however, we will be able to share news as to which domiciles are welcoming cannabis risk-writing captives with our readers soon, as well as the names of new group and agency captives, cell companies and pure captives writing cannabis related risk. 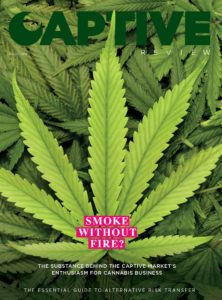 The hurdles facing the legal cannabis industry are plentiful, and these are only exasperated when its protagonists begin exploring commercial insurance options and/or captives. As with any emerging, start-up sector, on top of their own growing pains they will have to wait for (re)insurers and ancillary services to catch up, understand the new risks involved and price it competitively.

Add to this the grey legal areas and divided public opinion and the insurance industry has some tough choices to make as to whether it wants to commit to doing business with a controversial sector. The Lloyd’s of London decision to pull out of the legal cannabis market in 2015 is a good example of such conflicts.

There is no doubting great demand exists within the legal cannabis industry for alternative insurance solutions, and for early adopters it could prove to produce a very profitable pipeline of new business. On the other hand, how sustainable will it be in such a politically uncertain environment? Those are the risks carriers, brokers, captive managers and actuarial fi rms are having to weigh up.

For our European readers wondering why they have been left out of this feature, we did explore whether insurance solutions – captive or otherwise – for legal cannabis companies are doing the rounds, but so far we have come up short. There is one high profile producer and distributor in Switzerland, but he has not responded to questions from Captive Review while a Canadian company now with operations in Malta and Germany did also not engage. I hope to provide an update from the European market soon.