Captive sophistication is an area we have explored in increasing depth in recent editions. I was delighted to take that theme further and in person at our maiden European Captive Owners Summit, in Brussels, at the end of June.

Gathering 40 of the continent’s largest companies in one venue for a day of intimate roundtables and extensive networking proved a valuable experience for all and I look forward to bringing the new event format to Chicago (September), San Francisco (November) and London (February).

While new captive formations outside of the United States may remain relatively flat, it is apparent that those companies with insurance subsidiaries already in place are continually reviewing, evaluating and expanding them. 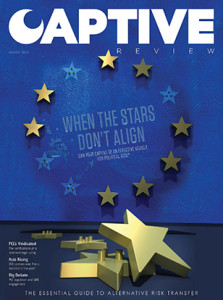 That was apparent in Brussels, while there was also strong evidence of rising scrutiny from boards seeking strong justification for the captive remaining in place.

One area a captive can be expanded or further justified is to add political risk, or at least a layer of it, and we explore the potential behind the maturing coverage as a diversification tool (p17).

Asia is an area that has been the subject of much discussion regarding emerging market growth. Similar to Latin America it can at times appear a case of more smoke than fire, but an accurate reflection of the state of play is presented on p27.

Finally, cell company development has featured prominently in Captive Review over the past 12 months as they are utilised for diverse uses (pension longevity risk springs to mind) and domiciles look to react by bringing more flexibility to their regulation.

Another important step was taken this year when a Montana district court delivered its verdict on the legal status of a core and individual cells within a PCC. Being the first substantial judgement on cell companies, I felt it appropriate to commission two industry comment pieces on the topic. I hope you will find both Nigel Feetham and Robin Amos’ articles informative on the issue.