The proliferation of domiciles is discussed often, particularly in an American context. In the United States, local industry, legislators and regulators have been keen to promote the idea of building captive domiciles to support local business and create jobs. For some state governors, it can be viewed as a good political win if they have created a whole new industry in the local economy. 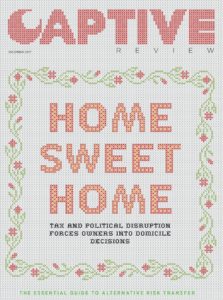 In Europe, meanwhile, there are mixed signals on this topic. While no government overseeing a large industrial economy is advocating to become, or has any interest in being, a specialist captive domicile, some multinational corporates view moving their captive home as one solution to Beps scrutiny.

Captive numbers worldwide continue to increase year-on-year, but they are also becoming more spread out and less concentrated in specialist hubs. The likes of Bermuda, Vermont, Guernsey and Luxembourg continue to thrive, either with expanding existing captives or new formations, but more owners than ever are reviewing the option of domiciling their captive closer to home.

The experiences of moving home, however, do vary. In our cover feature, we hear from organisations in Texas and Tennessee who are enjoying the perks of domiciling in their home state, while in Germany and New York the picture is a little more complicated.

While some industry commentators are keen to play down the level of redomestication activity taking place, it is clear captive owners of all sizes and geographies are keen to reassess their options.

The December edition of Captive Review also includes a full write-up and pictures from the first European & UK Captive Awards, held in London, in October. I was particularly pleased we were able to recognise three captive owners on the night – Swiss Federal Railways, Vodafone and British American Tobacco.

All three showed great innovation and passion for captives in their submissions and are deserving winners of their awards.