The final months of the year tend to be busy for both the industry and us journalists. The pace of business in the regulators’ and managers’ office, particularly in North America, quickens as new formations are pushed through before year-end. On the news side, there is plenty to write on and even get excited about.

Delaware’s announcement that it had licensed its “1,000th captive” caught the eye. This is not a slight on Delaware – I have congratulated the state’s captive director Steve Kinion on sustained and impressive growth – but the spate of headlines reacting to the announcement once again raised the issue of consistency concerning statistics and definitions. 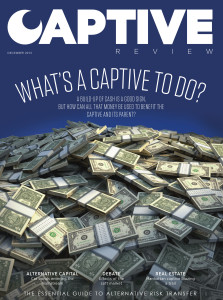 In Captive Review’s definition, the term “captive” includes single parent entities, group and association captives and RRGs. It would also include a cell company (be it PCC, ICC, SPC or SAC), but should not, however, encompass the individual cells or series business units (SBUs) that are held within each structure.

Delaware has recently passed legislation making what were previously SBUs now “series captive insurance companies” and are regulated in the same manner as other insurance companies. A series is, however, a creation of Delaware’s business organization laws, not its insurance laws.

By licensing a single parent captive for American Water, Captive Review suggests Delaware now has 1,000 (in fact it is now 1,001) risk bearing entities (RBEs) under its supervision, not 1,000 captives. RBEs can include all of the above mentioned entity types, including individual cells and series, and is a term a number of industry stakeholders are keen to move forward with.

To read the majority of headlines reporting the milestone, one might be forgiven for thinking Delaware was now the biggest captive domicile in the world. Steve Kinion has confirmed to Captive Review the breakdown of the 1,001 is 333 captives, 12 protected cells and 656 series captives.

These are the three biggest domiciles in the world. But the reason it is important goes beyond which domicile can claim to be the biggest or fastest growing. Having a standardized method for reporting formation numbers is vital for the industry to measure how and where it is growing and which types of structures are proving most popular.

We could have a whole separate debate on measuring the growth in captives making the 831(b) tax election, but that would likely involve opening up a transparent and constructive channel with the Internal Revenue Service. That can wait for another day.

There is unlikely to be a perfect solution that satisfies all, but hopefully something close to a standardized method can be settled upon. Better still, the captive media may accept the importance of understanding the numbers they are reporting.