The results are in and Captive Review is able to reveal the 2015 Power 50. In its fifth year, the annual ranking of global captive professionals is a decent gauge on the state of the industry – where there is growth, what the hot topics are and who is leaving a lasting impression on their peers.

There is no perfect science behind the compilation of the list and, as ever, it is guided by the number of votes received for individuals. This year, Captive Review received more than 1,400 submissions with the broadest range of nominations yet. 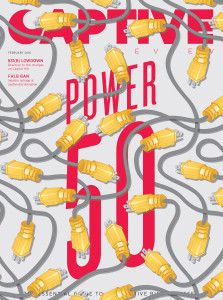 I would like to take this opportunity to congratulate David Provost, Vermont’s captive regulator, for reaching the top spot for the second time in three years. It is a well deserved placing and he leads a strong pack of captive regulators that made the 50 – Luxembourg’s Claude Wirion, Delaware’s Steve Kinion, Bermuda’s Shelby Weldon, Jeremy Quick of Guernsey and Tennessee’s Michael Corbett.

Europe made a strong showing in the Power 50 with Solvency II implementation ensuring a busy 2015 setting up an extremely important 2016 ahead. Many of those European practitioners cited in this year’s ranking will have influential roles to play in the way the continent’s market reacts to the long-anticipated directive.

For the first time, we have also published a second list solely dedicated to the fast-growing enterprise risk captive (ERC), or micro-captive, segment of the American market. As explained from page 41, there appears to be no slowing down in the number of formations taking the 831(b) election and, as with Solvency II, it will be interesting to see how the industry adapts to changes made to the tax code at the end of 2015.

Captive news at this time of year often surrounds the announcement of year-end formation statistics. When reporting these statistics, I will always endeavor to include the number of licences surrendered by a jurisdiction as well as the number added and provide the resulting net increase or decrease figure.

Unfortunately, not all domiciles are as forthcoming with the number of surrendered licences.  The overriding aim in reporting these figures is to provide an accurate snapshot of the captive industry. This can only be done by assessing the outs as well as ins during the preceding 12 months.

The statistics reported at the time of going to press have been included in this edition, but a full round-up and analysis will be provided in March.