It’s here.  It actually happened.  Insurers in the European Union are now under the supervision of a new codified directive – Solvency II.

Having observed and commented on the world of insurance for just two years, I have been spared the majority of the decade-long debate, discussion and delays on the, at times, controversial regime.  But for those stalwarts of the industry, and particularly those lobbying on behalf of captives, they would be forgiven for feeling as though this day would never come.

Unsurprisingly the attitude towards Solvency II and captives’ place within it has softened over the past 12 months.  Once the fight to exclude captives from Solvency II had been lost, attention turned first towards how to approach those requirements and secondly the positives that can be taken from the new regime. 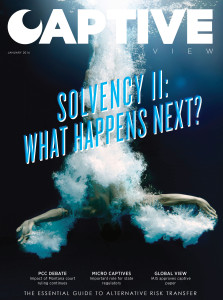 It is the latter that resonates strongest in the six pages we have dedicated to ‘Solvency II Predictions’ in this edition.  Talk of diversification, sophisticated captives and good governance is rife and there appears to be little doubt that those captive owners that can stomach the additional capital and reporting requirements may end up with a healthier vehicle as a result.

A number of question marks do remain, however.  Most notably the approach of each individual regulator will be watched closely as managers and owners wait to see what level of risk captives find themselves in.  Any predictions concerning captive consolidation or moves between domiciles appear to be on hold until the attitude of the regulators has been assessed and understood.

Whatever materialises over the next 12-18 months, it is likely by 2017 Europe’s captive industry will have a better sense of itself and movements will occur – whether that’s increased confidence in regulators resulting in a raft of new formations or owners moving out having been put off by heavy touch regulation remains to be seen.

The impact of Solvency II, however, will not be restricted to Europe.  The region’s offshore jurisdictions are primed to pounce if any exodus does occur, while we know Vermont and Delaware are keen to explore the opportunities that lie across the pond.

Although Bermuda’s Solvency II equivalence status does not include their captives – the advantages of a clearly bifurcated regime which some in Europe must surely envy – there does remain question marks over the relationship EU insurers (including captives) will be able to have with Bermuda’s captives.  The Federation of European Risk Management Associations (FERMA) is currently seeking guidance on this.