The past 12 months could be described as arduous for the captive insurance industry. Tax scrutiny, both in the United States’ domestic market and internationally through the Organisation for Economic Cooperation and Development’s (OECD) Base Erosion and Profit Shifting (Beps) project, have put owners and service providers on red alert.

These initiatives are not universally feared, however, with some commentators framing it is an opportunity to ‘clean up’ bad practice and renew the emphasis on good risk management reasons for using a captive. 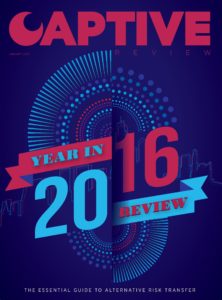 Our review of 2016 highlights the above points as well as other developments throughout the year, including the realities of Solvency II, growth in emerging markets and increased utilisation of multi-line, multi-year programmes.

The next 12 months is shaping up to be another vital year for the captive market. The OECD’s attitude towards captives is likely to be further refined, while it will also become clearer how national tax authorities will implement and interpret the Organisation’s guidance.

The US Tax Court’s ruling on the Avrahami case is expected in the first half of the year and the Internal Revenue Service (IRS) can be relied upon to further intervene on the topic of 831(b) captives – whether that’s viewed as a positive or a negative.

There will also be 12 more months of Solvency II experience for captive owners, managers and regulators to draw on and if any movement between domiciles is to materialise as a result of the directive, late 2017 could provide the indicators.

If the current pace of Brexit, or non-Brexit as it currently appears, continues then we are unlikely to know much more regarding the London market’s ability to keep its passporting rights by the end of the year. The capabilities of the London market will be closely monitored by the international captive market with it remaining the go-to place for reinsurance for captives of all sizes and types – from risk retention groups (RRGs) and group captives to the largest multinational-owned pure captives.