The turn of the year brings an end to a tumultuous 12 months for the captive insurance industry on both sides of the pond.

While the large European captives have had the OECD’s and national tax authorities’ increasing Beps scrutiny to contend with, as well as a second year of Solvency II implementation, in North America the industry has learnt more about the problems facing it regarding abuse of the 831(b) tax election. 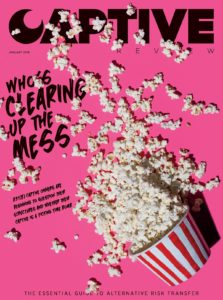 Stakeholders in the United States are no doubt pleased to have some clarity from the Avrahami decision and there is the feeling this is a good opportunity to clean up the mess that the smaller captive sector has got itself into.

Our cover feature explores how some of the early fallout from Avrahami and Notice 2016-66 is playing out. It is certainly evident that more captive owners are keen to seek out a second or third opinion on their structures in a bid to discover if they have ended up on the wrong side of the law.

One early indicator of how the noise around the 831(b) tax election is impacting captive business will be the end-of-year reporting from US domiciles. If new captive formation numbers are considerably down on last year, or we see a large number of dissolutions from the faster growing domiciles then it may hint at a cooling of interest in forming smaller captives, both by advisors and business owners themselves.

Looking ahead to 2018 in Europe, I expect us to see more consolidation of captives at those corporates that own more than one vehicle. This month’s news section contains one such example – French retailer Carrefour has closed its Dublin captive – and this activity is being driven by M&A at parent level, increasing frictional costs and more sensitivity around the ownership of multiple insurance subsidiaries.