My favourite Top Trumps set growing up was busses. Don’t ask me why. I’m not much of a bus fanatic, but it was a set one of my friends had and we used to play it for hours whenever I visited.

Today, however, I’ll happily admit that Top Trumps: Solvency II has taken the top spot. It is a shame there is not a larger selection of European captive domiciles to take part — a real game of Solvency II Top Trumps would currently be very short. 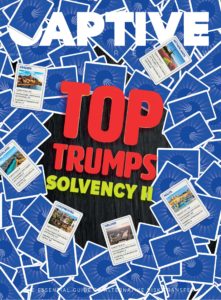 The scorings compiled for this limited Top Trumps set is somewhat tongue-in-cheek, although it is based on a collection of ratings I collected from a group of 10 domicile neutral captive consultants working across the European Union. As ever, it is not a perfect science and relatively subjective, but it will be interesting to see how these perceptions alter on an annual basis.

Our cover feature beginning on page 23 — The Principle of Proportionality: Myth or Reality — discusses in more depth the state-of-play in Europe’s major captive domiciles and how each regulator is interpreting and implementing Solvency II.

I am also delighted to be able to include some exclusive analysis from A. M. Best as to what they have learned from their clients’ fi rst solvency and fi nancial condition reports (SFCRs). This piece nicely complements our cover feature on Solvency II.

Lastly, a word on the 2017 US Captive Awards, to be held in Burlington, Vermont. By the time this edition is published, the extended deadline of 16 June will have been and gone.

The team at Captive Review has been overwhelmed by the interest and number of entries received this year. The awards ceremony on the 7 August will be our third in Burlington and the event continues to go from strength to strength.

More than 70 companies have entered, and around 170 entries have been submitted. It has also been great to see such a high level of interest in two of our new categories — Captive Innovation Award and Rising Star. I now look forward to the judging process, which I expect to be the toughest one yet.