Continuing the theme of justification from the June edition, this month’s Captive Review examines the peaking interest in placing third-party insurance into the captive (p20). One motivation for this can be to aid an American-parented captive’s bid to be treated as insurance for tax purposes, but another is profit.

Having just left his captive director role at Verizon after more than 12 years, Paul Johnson is ideally placed to discuss the benefits and challenges when taking such a path. 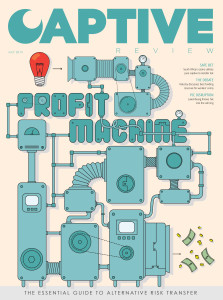 Verizon has one of the most sophisticated structures in the business and they have been Johnson’s responsibility, pride and joy for over a decade.

The profit-taking approach is not suited to all, however, and Marsh’s captive leader Chris Lay provides a useful insight into the types of industries that can benefit. Telecommunications giants such as Vodafone and Verizon are well known for this technique, while it is also utilised by the automobile and financial sectors.

The first six months of 2015 has also seen a gear shift in the much-discussed employee benefits space (p16).

In the United States the Department of Labor (DoL) has revitalised the ExPro process, which provides a fast-track option for corporations well prepared and decisive enough to bring EB into their insurance vehicle.

North Carolina manufacturing firm Sealed Air are one of the latest to make the move and their director of risk management Howard Edelstein is joined by Spring Consulting’s Karin Landry in outlining the process and its advantages.

There was potentially disruptive news out of Luxembourg (p19), with their new regulator Claude Wirion revealing to Captive Review that Europe’s leading domicile was preparing to introduce protected cell companies (PCCs).

If PCCs materialise in Luxembourg it could well be the captive solution that middle-market firms across continental Europe warm to. The domicile is already well-established with a solid reputation and may be an appealing alternative to utilising an offshore jurisdiction or emerging EU territory such as Malta or Gibraltar.