A re-occurring battle for risk and insurance managers can often be justifying the existence of a captive insurance company as an ongoing expense.

Although economic recovery has removed some of the aggressive pressure boards exerted on captives at the height of the 2007/08 financial crisis, the challenge still remains.

The June edition of Captive Review seeks to address this issue by exploring a number of areas the captive can deliver additional value or reduce costs. 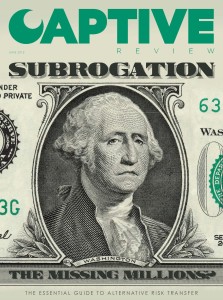 Having searched our archive vault I found subrogation (p19) to be a topic that had not been explored in depth before in the magazine.

Using this surprise as a starting point I began by touching base with specialists in the field on both sides of the Atlantic and, as you may expect, encouraging responses followed and a call to captive arms quickly materialised.

While inherent journalistic scepticism prompted me to reach out to managers, commercial carriers and owners themselves it remained apparent captives could be missing out on a trick.

Smaller captives, perhaps those not utilising a complex international insurance programme, should probably be exploring ‘no win, no fee’ subrogation specialists, while the large multinationals should be asking searching questions of their fronting partners and examining claims policies.

If carried out effectively, subrogation could produce significant claims return to the captive and thus improve underwriting profit.

The second feature (p26) explores the growing “strategic risk management” approach and its ability to draw other business elements into the captive outside of traditional insurance procurement.

More exotic and customised lines of insurance are part of this, but an overall culture of closer examination of the captive is also emerging.

One such line that could fall into this category is foreign exchange risk and Randall Beckie (p29), a well-seasoned tax expert and managing director of Frontrunner Captive Management, assesses the current attack on such underwriting by the Internal Revenue Service (IRS).

From page 22 Adams explains how in his role as chief risk officer (CRO) at Tri Marine Management he is assessing the captive options available to him and the considerations involved with establishing the global firm’s first insurance vehicle.