The months following year-end have been enlightening, intriguing and frustrating in equal measure. This, of course, is in reference to the collection of annual domicile statistics.

Before addressing the growing number of different captive classifications, it is important to note that captive jurisdictions vary greatly in the type of data they are able, or happy, to share with the media. Unfortunately, this leads to a degree of imbalance in the reporting.

Calling the counting of captives an exact science at present is near enough akin to calling Donald Trump and Bernie Sanders kindred spirits. They may have the same ultimate goal in sight, but they plan to take substantially different paths to get there. 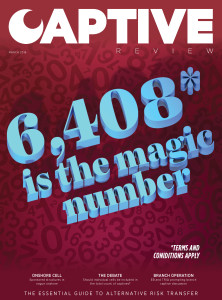 As is shown in the table on page 26, there are 12 different category of captives and risk bearing entities (RBEs). Some of those have already been consolidated.  For example, we have classed group and association captives together, while sponsored and cell companies (whether they be SPC, SAC, ICC or PCC) are also combined. Special purpose captives and special purpose financial captives are grouped as one category too.

If Hugh Rosenbaum was to have his way (page 30-31), the series captive question would almost be moot since he argues, convincingly, that it is time the captive industry recognises cells as captives and add their number to the total count. If we brought in individual cells, we certainly should do the same with series.

This Debate on whether or not the status of cells should be raised – and Vermont’s Dan Towle makes an equally compelling case taking the opposing view – is a welcome addition to this edition and I believe it poses some important and difficult questions for the industry. Is there any chance of a consensus between captive domiciles? Would a uniformed way of reporting be achievable? Is there any one governing body or association that can make that decision? The pessimist in me would be inclined to suggest none of those three questions are going to receive a positive answer.

There is little doubt the statistics are important to everyone in the industry – regulators, service providers, captive owners and prospective owners. For this reason, we have included a second table alongside our world map displaying the bare bones statistics, which provides all the information domiciles have shared with us. That way, our readers can interpret the data how they see fit.

Tenants pay a premium into the captive in lieu of a security deposit to cover landlords’ potential losses....
MORE
Mark Richardson

There's not now long to go until the biggest event of the year in the European captive insurance...
MORE
Mark Richardson