Collecting the year-end statistics from every captive domicile around the world — from Vermont to Singapore, from Switzerland to Puerto Rico — is primarily a test of administrative and persistence skills. At the end of 2016, there were 6,618 active captives around the world and I am confident this is the most accurate forecast available.

A phrase I’ve used in each of the last three editions in relation to this task is “this is not an exact science”. While that remains true, a more in-depth domicile-by- domicile breakdown has been included than before and we have done greater regional analysis, as well as by captive type. I do not believe any results from this year’s analysis will be a big surprise to our readers, but the findings do serve to reinforce just how much of an advantage the American captive marketplace has over its peers in Europe and Asia right now. 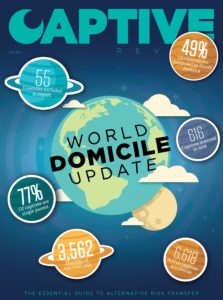 Globally, there were 616 new captives formed last year, and 78% of them were domiciled in the United States’ collection of captive friendly jurisdictions.

Quite simply, an equivalent of the 831(b) tax election does not exist in Europe or Asia. Asia has plenty of growth potential left, but until Europe’s captive consultants are able to provide more middle market solutions — most likely through cell or group captive solutions, since an EU version of 831(b) is even less likely than a Jeremy Corbyn victory in upcoming UK general election — it will lag behind its American counterparts.

The middle market drive in the United States is best demonstrated through our finding that of 478 new captives licensed in the US during 2016, 58% came from four domiciles — North Carolina, Delaware, Utah and Tennessee. These domiciles are predominantly attracting smaller captives, although Tennessee is beginning to see more action from its large home-state corporations.

Europe does seem to face a never ending set of headwinds — Solvency II, Beps, Brexit — but our analysts do believe there is growth around the corner as feasibility study activity begins to ramp up on the continent. We’ll have to wait for the 2017 and 2018 figures to see if that optimism is justified.

Read the latest edition of Captive Review, which includes a full list of winners from the recent US...
MORE
Mark Richardson

Find out if your firm made it onto the shortlist for the biggest awards ceremony in European captive...
MORE