Counting captives is not a straightforward task, but I believe Captive Review has again delivered the most accurate snapshot of the global industry.

It is the first time our annual World Domicile Update, in partnership with Wilmington Trust, has reported a net decrease in the total number of active captives and it is unlikely such a drop has occurred since the captive insurance concept took off in the 1970s and 1980s. The decrease is not major, however, and we highlight a number of trends and circumstances that has prompted the slight decline in our analysis beginning on page 27. 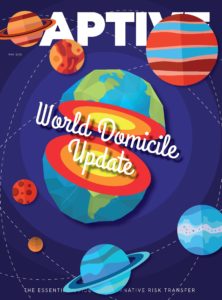 There were 6,482 active captives as of 31 December 2017 compared to 6,618 at the end of 2016. We included more jurisdictions than ever before in our report, although those unable to submit data in time included St Lucia, Norway and Denmark.

The data on individual cells and series remains inconsistent between jurisdictions and, as such, we kept them out of the total figures. We have, however, laid out cell numbers domicile by domicile when they are provided, and included them in the total count of risk-bearing entities (RBEs) in the regional breakdowns.

I would like to thank all the jurisdictions and associations who have cooperated with our research and data requests since the turn of the year, as well as a number of consultants and service providers who continue to point us in the right direction as and when we hit a brick wall.

This annual statistical update should serve industry well in identifying broader trends between and within the major captive markets outside of companies’ own activity. Despite the total number of captives decreasing during 2017, the spread of new formations shows the captive concept remains attractive to a wide range of company types and sizes.

In one of our industry comment pieces, Robert Walling, of Pinnacle Actuarial Resources, has provided a timely discussion on whether captive service providers should be more closely regulated (page 20-21). It is a topic raised with me before – by regulators and experienced captive managers – as captives become more sophisticated, face greater scrutiny and look to improve their own governance.

Walling has collected feedback from regulators across the US and I believe it is a good starting point for a wider discussion. As ever, if you have any questions or comments regarding the World Domicile Update please do not hesitate to contact me.