Europe’s captive industry has, at times, been talked down as the poorer cousin of the United States when it comes to formation growth and innovation in recent years. While America’s middle market has driven captive numbers up, taking advantage of the plethora of onshore domicile options now available, European businesses are seen hurdling a multitude of obstacles to simply keep their captives intact.

The common consensus, though, is that having adapted to the higher standards demanded by Solvency II the existing captives could not be in better health and are set fair to continue increasing their premium volume with new lines and higher retentions. The OECD’s Base Erosion and Profi t Shifting (Beps) project and the economic uncertainty brought about by Brexit, however, are sure to replace the headwinds originally delivered by the run-up to Solvency II. 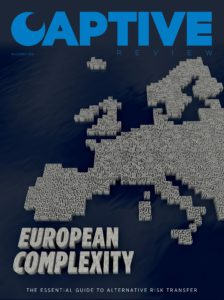 If Europe is not delivering the kind of headline grabbing new captive figures seen across the pond, it does not mean innovation and substantial development is not taking place. Guernsey is leading the way on insurance-linked securities business and conceded in September it was looking more towards producer owned reinsurance companies (PORCs) to serve the middle market.

Meanwhile Malta, the only truly EU domicile to o er protected cell company (PCC) facilities, is being tipped to take advantage of any businesses more swayed by renting a cell now Solvency II is a reality.

It was good to hear in October that EY was taking a pro-active approach to the threat of Beps by trying to put together an industry working group to engage the OECD. A number of industry stakeholders have produced strong and valuable papers, such as Aon and FERMA, but there has been little in the way of collaboration or a common front.

John Morrey, of Builders Re, sums up the value of captives nicely when he cites their own workers’ compensation ratio which is well below the market average. “We want to have engaged employers who don’t want to have accidents on their watch and that has got to be a good thing for society,” he says in our profile on page 20. “That is the message people like me and others in the industry need to be getting out there.”

These direct benefits to business and society more broadly can often get lost in translation when we are discussing the tax scrutiny of captives, but they are invaluable examples which lawmakers and tax authorities are more likely to take notice of. That is why I hope more captive owners are given a voice in the industry’s liaisons with the OECD and national tax authorities, whether it be through the EY working group, the relevant risk management association or independently.

Lastly, the biennial European Captive Forum will be taking place on Tuesday, 8 and Wednesday, 9 November in Luxembourg and I am looking forward to catching up with more than 1,000 industry stakeholders. It has been a pleasure working with ECIROA to deliver the event which, as ever, promises to be an informative and valuable experience.