At Captive Review we rarely opt for a themed cover, but there was something about ‘killing off’ a captive that lent itself to embracing the Halloween spirit.

Captives placed into run-off or being disposed with is no new phenomenon, but as discussed in our cover feature, Solvency II and increased scrutiny by tax authorities of wholly-owned subsidiaries around the world has, and is, prompting a rethink by a significant number of captive owners. 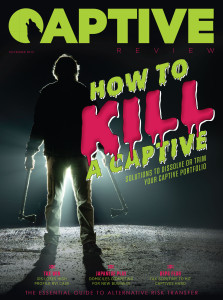 The captive is, after all, a company in its own right and a financial vehicle that needs to be given attention and managed with care.  Discussions over its continued relevance, efficiency and suitability should be taken seriously not just by the risk and insurance manager, but at the treasury and CFO level too.

That leads me onto the other key theme running through this edition – Base Erosion and Profit Shifting (BEPS), as scrutinized by the Organisation for Economic Co-operation and Development (OECD).

Last month I began contacting European risk and insurance managers as I researched agenda topics for the 2016 European Captive Owners Summit, to be held in Brussels in June.  One topic stood out way and above all others as being of top of their priority list – BEPS.

From speaking to the captive industry, however, there appears to be a degree of complacency and/or unawareness of the threat BEPS and various governments’ planned implementation of the OECD guidance will have on the status quo.

The captive owners, in the most part, appear to be ahead of the industry and jurisdictions on this topic.

To point to improved tax transparency initiatives in the major captive domiciles is to miss the point of attack entirely, since the authorities will be examining governance and “substance” of operations particularly where wholly-owned subsidiaries in offshore domiciles are concerned.

Insurance management veteran Ian Kilpatrick shares his deep concerns with Captive Review on this very topic and there is a feeling that some in the industry are burying their head in the sand as to its potential impact.  A future where multinationals could be required to locate senior decision makers in their captive domicile of choice is predicted by Kilpatrick.

Finally, on perhaps a more positive note, I am happy to report my relocation to Captive Review’s New York office has been completed.  As many of you will be aware, this move had been in the pipeline and, on a personal level, I would like to thank those who have offered their support and guidance in settling into a new city.