The dust has settled somewhat after the burst of news and commentary on the Avrahami decision. Rightly, it dominated the previous edition of Captive Review, but this month it has been good to get back to some of the more ‘traditional’ areas we associate captives with. 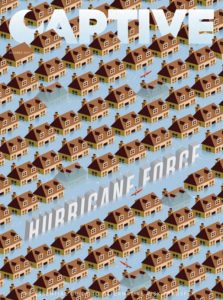 It is reassuring to see this innovative use of captive structure re-appear after a two-year break since the original boom, kicked off by BT Group, in 2014/15. There is not much new formation activity in European domiciles at present, but in the ICC pension longevity play Guernsey has carved itself a real niche that is proving valuable to some of the largest pension schemes in Europe.

The hurricane season in the United States and Caribbean has been brutal this year, with numerous records broken. While Florida is often prepared to be hit hard by such events, residential areas and businesses in Houston, Texas, particularly, have suffered badly.

Multiple risk modellers and claims experts are quick to post predicted losses in these scenarios and no doubt more accurate figures will emerge in a couple of months’ time. What is often overlooked, however, is the role captives play in such catastrophes and whether they are on the hook for claims when their parent is impacted.

Our cover feature deals with this in detail, as well as the expected impact on the insurance-linked securities (ILS) market which has been booming – often writing flood and wind damage risks.

I would like to pay special tribute to Gerjan Delhaas, of AkzoNobel. Gerjan is a good friend of Captive Review and recently completed his MBA at NCOI University, in the Netherlands. His thesis focused on supply chain and business interruption risks, so I was delighted when he agreed to write an article on these issues, and how captives can contribute, in this edition.