The September edition of Captive Review has turned out quite different to how it was three days before deadline. The publication of Judge Holmes’ opinion, however, in the first US Tax Court case concerning an 831(b)-electing captive, is arguably the single biggest news story for the industry in the past two years.

While the topic is sensitive and the majority of practitioners are understandably cautious in their immediate responses, I have been pleasantly surprised by the volume of captive managers and advisors who are willing to go on the record with their initial thoughts.

As you will read in our four-page feature on the Avrahami opinion, the reaction has been relatively consistent. The industry has been quick to distance itself from the practices present in the Feedback Insurance Company structure and there is an element of “that’s not how we do it” in most of the comments. 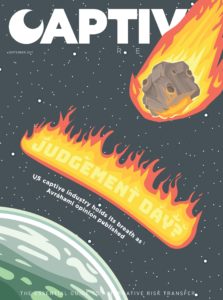 Readers outside of North America, and those exclusively serving the traditional, larger captive market, may wonder why an Arizona jewellery store’s small St Kitts-domiciled captive is relevant to them and their business. At a time when tax authorities around the world are set to scrutinise all captive types and sizes more closely, any ‘proven’ cases of captive abuse are unlikely to help the situation.

For those in Europe dealing with Base Erosion and Profit Shifting (Beps), understanding the controversy and debate surrounding the 831(b) tax election in the United States might be benefi cial for the day a local tax authority casually brings it up and seeks to draw a parallel between the two.

For those selling the large captive concept in emerging markets such as Asia and Latin America, knowing the fundamental differences of a micro-captive structure will come in handy when questioned on it.

Tax controversy and perception remains an issue for captives around the globe. Captive Review’s recent Asia White Paper demonstrated this clearly and the Governor of Bank Negara Malaysia discussed it at length in his keynote address in Kuala Lumpur.

In the coming months Captive Review will be asking tougher questions regarding captives and tax and, in particularly, what parties are to blame for the mess the 831(b) captive segment finds itself in? Does responsibility lie solely at a few ‘rogue’ promoters’ doors? Or do captive regulators, actuaries and other advisers have questions to answer?

On a more positive note, it was a pleasure to co-host the US Captive Review Awards in Burlington, Vermont, on Monday, 7 August with my colleague Nick Morgan. There were some incredibly deserving winners and it was an excellent opportunity to show off the great and the good of America’s captive insurance industry.

I would like to give special mention to Skip Myers, who took home the Outstanding Contribution award. He was a very popular winner, clearly demonstrated by the standing ovation he received on the night.