“You are not authorised to view this content. Please complete this form to get a guest membership or contact sales@captivereview.com”
Sophie Thompson

Ireland holds an esteemed place in the global captive (re)insurance industry. Often looked upon as a resilient, yet versatile domicile, Ireland was knocked back during the 2008 financial crisis and rose to regain its place among the captive elite.

During more than 10 years of Solvency II evolution, the financial centre busied itself with implementation thanks to the Central Bank of Ireland’s SII predictions. Local regulatory requirements were installed in order to create a seamless transition into the European requirements which went live across the continent on 1 January, 2016.

As the United Kingdom’s European Union referendum looms, Ireland is poised to capitalise should a ‘Brexit’ transpire. Freedom of movement, currency volatility and restricted access to the European market would all hinder the UK if the ‘Leave’ campaign were to emerge victorious. And, as the weeks building up to 23 June tick away, Ireland waits in the wings. 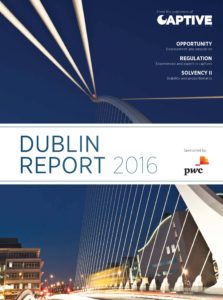 Captive Review’s Dublin Report 2016, sponsored by PWC, offers a wealth of information contributed by industry-leading individuals and a range of insightful roundtable discussions which aim to provide the reader with unique inside perspectives of the jurisdiction’s regulations, vivid captive history and its exciting future.