How To Start A Captive

The global captive industry is growing and emerging domiciles are working hard to catch up with their more established counterparts.

In the United States captives are no longer exclusive to the Fortune 500 firms and the majority of new formations now come from the middle market which is rapidly embracing self insurance and alternative risk transfer. 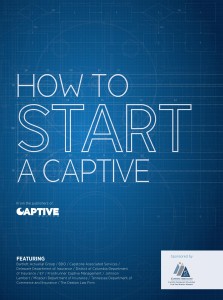 This in turn is forcing captive managers and service providers, not to mention regulators, to adapt quickly in order to keep up with the new demographic.

At the same time the Internal Revenue Service is scrambling to clamp down on the perceived abuse of captive structures and maintain credibility as a risk management tool first and foremost and a method of tax optimisation after.

Offshore jurisdictions are also benefitting from increased interest from the US middle market, although the rise of US onshore is putting pressure on some established offshore options.

This Captive Review Start-Up Report 2015 seeks to provide a comprehensive guide for prospective captive owners on aspects of tax and general compliance, as well as domicile and captive structure choices.

Captive Review questions established industry experts from offshore and onshore domiciles in both the public and private sectors to discuss the essential aspects prospective captive owners must consider before starting the formation process.