“You are not authorised to view this content. Please complete this form to get a guest membership or contact sales@captivereview.com”
Jo Cole

The recent edition of American football’s championship Super Bowl game, occurring earlier this month, was one for the ages, featuring an improbable comeback. With the underdog Atlanta Falcons up by a seemingly insurmountable 25 points late in the third quarter, it appeared the odds makers’ pre-game three-point favourite and prior four-time Super Bowl champion, New England Patriots, would fold without a fight. That was before New England rallied unforgettably to score 31 unanswered points to win the game and beat the spread.

Not unlike a popular sporting match, the ILS market has its share of twists and turns, exciting plays and unpredictable outcomes. Two decades on from the issuance of the first catastrophe bond named after the capital of the Cayman Islands, George Town Re for St. Paul Re in 1996, the globalisation of the insurance-linked securities (ILS) market continues, growing at a still impressive 10% annual growth rate last year notwithstanding the current soft market. Overall convergence market capital has now reached an estimated $80bn of total global property reinsurance capital of $600bn with ILS growth making up more than 25% of total new growth during the year. 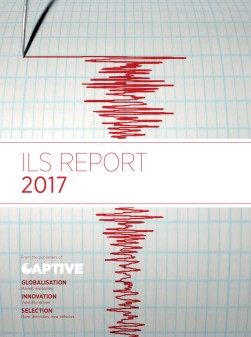 The compelling story, or game plan, is the same. Investors are drawn to the non-correlated nature of ILS investments and positive expected returns. Cedents, in turn, like ILS’s cash in the bank, fully-collateralised structures which don’t depend on the claims-paying ability ratings of their reinsurance partners. The players, investors and cedents alike, are expanding around the globe, from Alabama (US eastern seaboard) to Zurich, and from Turkey to Tokyo. For these reasons, the ILS sector will continue to grow in volume and importance as it also continues to innovate and as global demand for property catastrophe reinsurance grows.

I am pleased to introduce this Captive Review ILS Report 2017, where we hear from some of the industry’s leading players about key trends driving the current market and what to expect next. As one initial prediction for discussion, we have seen ILS London making some headway post-Brexit vote in effort to compete with global ILS centres. Given the current social economic and political environment, as well as the predominance of underlying US catastrophe risks in the market, will we someday see ILS USA?

For those of you who are still on the sidelines, or not even to the stadium yet, don’t worry, the game is still new enough. It’s still the first quarter and plenty of time to put your gardening tools away and make your way down to the game. Come on, ILS. Give us a great game and… beat the spread!