The statistics are in. Captive Review forecasts there are 6,618 active captives around the world at year-end 2016.  This number includes cell companies and series cores, but not individual cells or series.

Fifty-five domiciles, from Vermont and Singapore to Switzerland and Puerto Rico, took part in this year’s World Domicile Update, sponsored by Liptz & Associates, which breaks down new formation and surrendered licence activity by region and type.

There were 616 new licences issued during 2016, while 407 licences were surrendered during the calendar year. This means there was a net increase of 209 captives around the world.

The full World Domicile Update, sponsored by Liptz & Associates, can be accessed below: 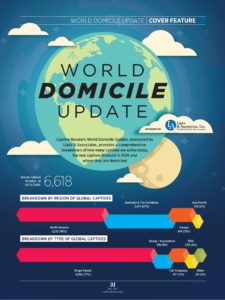