Julie Mix McPeak is the commissioner of Tennessee Department of Commerce and Insurance. Commissioner Julie Mix McPeak is the first woman to serve as chief insurance regulator in more than one state. In February 2016, McPeak was elected as vice president of the National Association of Insurance Commissioners, US standard-setting and regulatory support organisation created and governed by the chief insurance regulators from the 50 states, the District of Columbia and five US territories.  Here, McPeak introduces the Tennessee Report 2017.

Ranked nationally and internationally as one of the ‘best in class’ captive domiciles, Tennessee’s captive insurance market has shown record growth in the past five years, showcasing the state’s pro-business environment. Today, Tennessee captives have created an estimated $436m economic impact through direct and indirect spending related to new jobs, investments and deposits.

We’re proud of our roots in Tennessee and we can trace today’s successes back to our recent past.

In 2011, Tennessee governor Bill Haslam and the Legislature showed the vision to modernise the state’s existing laws in order to create effective, flexible, and balanced regulations that are focused on a business mind-set and marketplace needs. 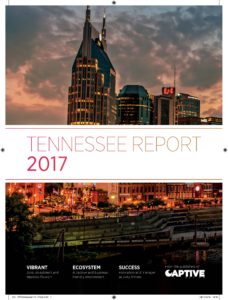 Recent updates to the protected cell law now make Tennessee the strongest domicile in the world for the operation of cell companies. And captives redomesticating from offshore to Tennessee are now eligible to forego paying premium taxes in either the first or second year of their operation.

Looking ahead, Tennessee’s captive insurance statute must continue to evolve in order to ensure that we stay relevant to the changing needs of the business marketplace. Further, we must support the service provider industry as it continues to expand across the state.

In Tennessee, we’re working to build on our successes and make an even brighter future for captives tomorrow!