Paul Woehrmann and Florence Tondu-Mélique, of Zurich, provide insight into the latest market observations and the continued softening market.

The value of captive owner relationships

The majority of captive reinsurers have embedded non-proportional reinsurance structures within primary layers, including annual or term aggregates to protect the captive balance sheet against unexpected losses. The excess layers typically stay with the fronting insurer either on net or partially co- or reinsured. The related reinsurance commissions contribute to the financing of the fixed costs of the fronting insurers’ international networks.

All captive owners are very keen to run a profitable business under underwriting considerations. They therefore constantly try to reduce the cost of risk and protect profitability by introducing appropriate risk control measures, which reduce the frequency of claims and the cost of premiums. Once the primary layer is running profitably, it is highly likely that excess layers will follow the same path.

The majority of captive customers are also interested in a long-term business relationship for the benefit of both themselves and the fronting insurers.

On the other hand, captive reinsurance has become more difficult in Europe — for fronting insurers and captive owners — due to Solvency 2 (3) and the OECD framework on Base Erosion and Profit Shifting (Beps) (4).

The insurance and reinsurance markets are changing, and over time could consolidate even more (5). In addition, the entire industry faces rising pressure, largely due to the steadily decreasing premium rates leading to lower margins, and additional capacity entering from the financial market.

A continued soft market development could lead to a change in buying behaviour on the part of large captive owners, which might become more interested in paying for use of insurers’ infrastructure in order to capitalise on potential arbitrage opportunities (6). Captives could thus be used more actively as a gate to the reinsurance and ILS market (7). In this context, captive customers may be able benefit from additional services by large fronting insurers with a global reach, for example regular quantitative analysis of the captive risk retention (“captive health checks”).

Following the implementation of the European Solvency 2 regulations, we have experienced increased interest among large European captive owners in including employee benefit programmes, so as to diversify their captive portfolios and optimise their capital structure. Most EB programmes are reinsured to captives on a proportional basis. This is a big business opportunity for various market participants, and such wide-ranging solutions require comprehensive captive expertise to ensure that the complex handling is not overly complicated.

Mergers and acquisitions will always raise serious questions for a captive owner’s existing insurance arrangements, reinsurance and retrocession structures. We have so far observed three M&A scenarios which could occur after a transaction:

As a result of the M&A transaction, a company might have reached the critical size for establishing a captive for both non-life and employee benefit exposures. Before the transaction, the organisation may have been too small to consider the use of a captive in its risk management, but the resulting structure could open up new opportunities.

Such companies can benefit from an existing risk financing tool when one is available, which they can use to the advantage of the new corporate structure.

Captive owners need to identify which captives might be redundant, and which they want to keep and strengthen. Quite often, owners keep at least one captive for their US risks and another in a different jurisdiction for their ‘rest of the world’ programmes.

Adopting a broader view of fronting insurance, as demonstrated below, is crucial in order to generate value for the captive owner. 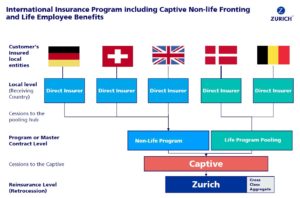 Very often, captive customers request cross-class captive balance sheet protections (10), to protect them from both non-life and life exposures. The increasing demand from French captive owners to include employee benefit programmes has already been noted.

Another benefit for a captive owner would be a centralised clearing house provided by a professional fronting insurer. This allows one captive agreement to be established, with various programmes or lines of business being reinsured through it. The centralised clearing house also allows for the monitoring of credit risk exposure, and an arm’s length check which will be increasingly important due to tax developments such as Beps. Finally, the reinsurance premium and claims administration will be relieved by the delivery of consistent templates of captive bordereaux.

The French insurance and reinsurance market is currently very competitive, as is the entire European market.

It is not surprising that Luxembourg has the highest share of captives of French parent companies and that all such captives are entirely licensed as reinsurance companies. The remaining captives are spread around the world.

Independent of the captive domicile, captives allow French parent companies to endeavour arbitration opportunities. First of all, captive owners could benefit from such pricing arbitrage opportunities if they move non-proportional reinsurances more in the direction of proportional structures. This way, they can in a broader manner approach the entire reinsurance market on the retrocession level. Since reinsurance carriers, unlike fronting insurers, are not required to finance a large network and have most of their business in high excess layers, they may approach pricing differently from insurance carriers. Reinsurance carriers may therefore offer prices for high excess layers that traditional insurance companies cannot.

French captive owners certainly have experience of how to use their captives in order to strengthen their core business. We have for instance observed that global car manufacturers have taken advantage of the issuance of extended car warranties for second-hand car owners. These programmes are quite often reinsured to captives on a proportional basis and help car manufacturers to strengthen their business relationship with second-hand car owners.

Furthermore, fronting insurers should consider the support of cyber fronting programs so that captive owners can protect their local subsidiaries against cyber-attacks. The fronting insurer would provide comprehensive support for local premium and claims administration and allow captive owners to transfer their entire exposure to the captive, with the captive then transferring such parts of the risks as retrocession to the insurance / reinsurance market for which capacity is available.

The current environment provides French captive owners the opportunity to use their captives more actively, in order to:

– bring two worlds (life and non-life) into one reinsurance captive;

As a global insurance company, Zurich is well aware of regulatory demands and the significant investments required to be in a position to respond confidently to these requirements. In anticipation of increased scrutiny, Zurich long ago adopted a consistent approach to arm’s length pricing for our captive transactions.

Zurich’s captive customers can benefit from their captives being part of Zurich’s comprehensive international programmes proposition, a centrally managed insurance structure providing multinational customers with as consistent as possible coverage, terms and limits in every country where a customer has assets, operations and employees.

“We are committed to our International Programs and have invested significantly, and will continue to invest, in our staff, our network and our tools,” Helene Westerlind, global head of international programs, Zurich Commercial Insurance.

Zurich Commercial Insurance is intent on assisting captive owners with their large and complex insurance requirements and interested in entering into long-term business relationships.

Florence Tondu-Mélique is chief executive officer of Zurich France. She is a well-known and respected professional in the industry with a broad range of experience, people leadership, and a proven track record. Prior to joining Zurich in June 2017, she was chief operating officer at Hiscox Europe. Tondu-Melique holds a Master of Science degree from HEC Paris, and a Master’s in business administration from Harvard.

Paul Woehrmann has developed a reputation as one of the world’s leading authorities on captive strategy and was ranked the third most influential person in the industry by Captive Review in 2016. He has been at Zurich Insurance since 1990 and part of the executive management team for more than 20 years. Woehrmann leads a team of experts which is located in four countries across the world.