Annual premium represented in the survey is slightly up from $89bn to $91.5bn.  Eighteen managers took part in the survey.

The survey, which will be free to view in full at www.captivereview.com on Wednesday, 17 August, produced a number of headline results relating to themes ranging from Solvency II and concerns around the Base Erosion and Profit Shifting (Beps) project to the future of the 831(b) market in the United States and re-domestication activity. 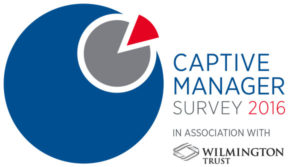 A number of the highlights are noted below and will be expanded upon in the full report next week including industry reaction from a wade ranger of players.

The full survey results also lifts the lid on the captive types, and in what proportion, that make up the 6,655 risk bearing entities (RBEs) represented in the survey and the proportion of cell companies that are owned or managed for a third-party by the managers.

“Although the number of participating managers in this year’s survey is slightly down on 2015, this is partly down to consolidation within the industry,” Richard Cutcher, editor of Captive Review, said.

“This is best demonstrated by Artex which acquired Kane and Hexagon PCC in the past 12 months, both of whom were regular participants in our annual industry survey.

“Those managers that have taken part have shared more information than ever before with us, helping Captive Review portray an accurate reflection of the state of market and some of the key trends and themes in 2016.  I thank them for the time, care and attention that they gave their responses.”

Full results and analysis of the 2016 Captive Manager Survey, in association with Wilmington Trust, will be available as a digital e-book from Wednesday, 10 August on www.captivereview.com