Extinction Rebellion protestors have blocked the entrance to Lloyds of London at 7am this morning, chaining and gluing themselves across the doors.

There were unconfirmed reports that Lloyds have halted trading in response, however Lloyds made a statement about the protest at 11am, denying trading had stopped.

“Lloyd’s supports safe and constructive engagement on climate change and we’re continuing to work to support a responsible transition,” a statement said.

“In the interests of people’s safety, we have advised Corporation employees and market participants not to come into the building today. The market remains open and trading is continuing using our remote capabilities.” 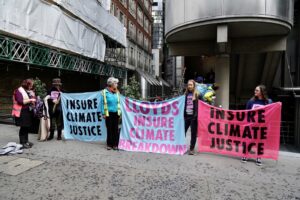 Protestors block the entrances to Lloyds of London

Approximately 40 of the climate activist group blocked themselves across more than 20 entrances to the building in protest of Lloyds of London insuring and reinsuring fossil fuels.

Many of the group were dressed up in costumes and held signs, and some scaled the building to hang a banner that said “End fossil fuels now”. 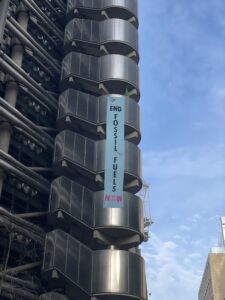 “Insuring new oil and gas projects in the North Sea, which was part of the government’s energy strategy, does nothing to solve the cost of living crisis. Instead, it locks us into a system that’s already pushing millions into poverty.”

As we are all stridently aware, the onset of the coronavirus pandemic in the western...
MORE
Captive Owner Profile: Denya Feng, Cummins

Deyna Feng, director of captive programs at Cummins, discusses the role their captive plays in...
MORE