Sequel CEO accused of sexism and objectifying women, will be investigated

CEO of Sequel, part of the Insurtech company Verisk, Ian Summers has been accused of sexism and objectifying women after he posted a photo on LinkedIn of women dressed in revealing costumes at an industry event next to male Verisk team members in business attire.

The photo was taken at the Verisk booth at a conference held by the Wholesale and Speciality Insurance Association (WSIA) in New Orleans. It features three men in suits, shirts and pants, and two women dressed in Mardi Gras-esque attire with corsets, short skirts, and feathered headdresses. The two women were, according to Verisk, hired by the WSIA.

The text above the photo, presumably written by Summers, states “The team working hard at WSIA #team”.

Summers has been with Verisk since 2014, and previously worked as chief information officer at Aon. 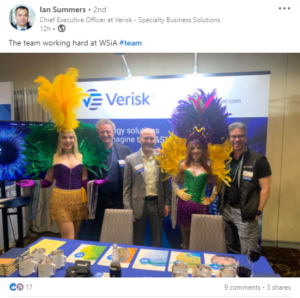 The post resulted in a number of comments from insurance industry professionals of all genders criticising Summers and the post, with many expressing their disappointment with Verisk.

“Was this picture taken in the 1980s? Spectacularly wrong on many levels,” Tom Butcher said, while broker Colin Shillito called it “ridiculous and embarrassing”.

“Not your finest hour Versik objectifying women and expecting them to smile! How disappointing,” Madeline Bailey from Norton Rose Fulbright said.

As a company Verisk claims to have a “longstanding commitment” to diversity and inclusion, stating on their website that D&I is  “fundamental to our culture and our values. It’s part of everything we do—from how we serve our customers to how we build our workforce.”

When questioned by Captive Review Verisk did not answer questions surrounding the photo, the company’s D&I policies or its gender pay gap. Instead a company spokesperson responded with a short statement promising an investigation into the incident.

“This employee’s post and what it conveys does not reflect our values, commitment to diversity and inclusion and is far from acceptable. While we don’t discuss personnel matters publicly, we will launch a full investigation and take necessary disciplinary actions,” Verisk spokesperson Alberto Canal told Captive Review.

“Verisk is a values-driven company committed to fostering, cultivating and preserving an inclusive culture that encourages, supports and celebrates diverse voices. As a result, we will initiate a full review of future trade show plans to ensure nothing like this takes place again.”

The Wholesale and Speciality Insurance Association did not respond to questions from Captive Review before deadline.

As we are all stridently aware, the onset of the coronavirus pandemic in the western...
MORE
Captive Owner Profile: Denya Feng, Cummins

Deyna Feng, director of captive programs at Cummins, discusses the role their captive plays in...
MORE