Tax and legal commentators in America’s captive insurance industry are not getting much respite, with two more high profile tax court opinions published in June.

Our cover feature addresses the Reserve Mechanical case, and references another Internal Revenue Service victory over the taxpayer in the US Tax Court as it continues its campaign to rid the insurance industry of perceived abuses of 831(b) and, in this instance, 501(c)(15).

We also cover Johnson & Johnson being denied a hefty self-procurement tax refund by the Tax Court of New Jersey (page 16). Unfortunately, due to print deadline restrictions we were not able to provide as much immediate analysis of the Johnson & Johnson case as we would have liked, but we will be following up in the August edition. 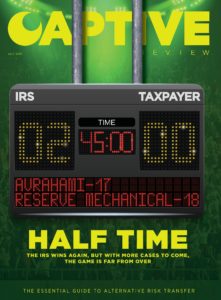 Considering these two cases together, however, is an illuminating illustration of the diversity in America’s captive industry. They are two very different captives with two incomparable owners.

The Reserve Mechanical dispute concerns an Anguilla-domiciled captive with initial capitalisation of just $100,000 and writing annual premium of no more than $450,000. Its ultimate parent and primary insured, Peak Mechanical & Components, Inc., has around 17 employees. Johnson & Johnson, meanwhile, is a multinational medical devices, pharmaceutical and consumer goods conglomerate with 134,000 employees worldwide and $76bn in annual revenue. The disputed premium tax alone is $56m.

Both cases also highlight the ongoing uncertainties facing captive owners at both ends of the spectrum. For how long will small captive owners and their advisors operate in a state of limbo, unsure as to whether they are meeting the, as yet, undefined criteria of the IRS and US Tax Court? The fact commentators are not lambasting Reserve Mechanical in the same way they did with Avrahami indicates round two is not quite as clear cut as far as the industry is concerned.

In Johnson & Johnson, the applicability of the Nonadmitted and Reinsurance Reform Act of 2010 (NRRA) to captives is being discussed again. It is a debate with broad implications, not just for captive owners balancing compliance while avoiding unnecessarily infl ating their tax bill, but for specialist captive domiciles too, such as Vermont, South Carolina and Delaware.

It is unclear, at this point, whether Johnson & Johnson will appeal the summary judgement. Either way, it would be helpful if a court with greater reach than a state tax court, or better still the United States Congress, would at least take a stab at providing the clarity America’s captive industry greatly needs.